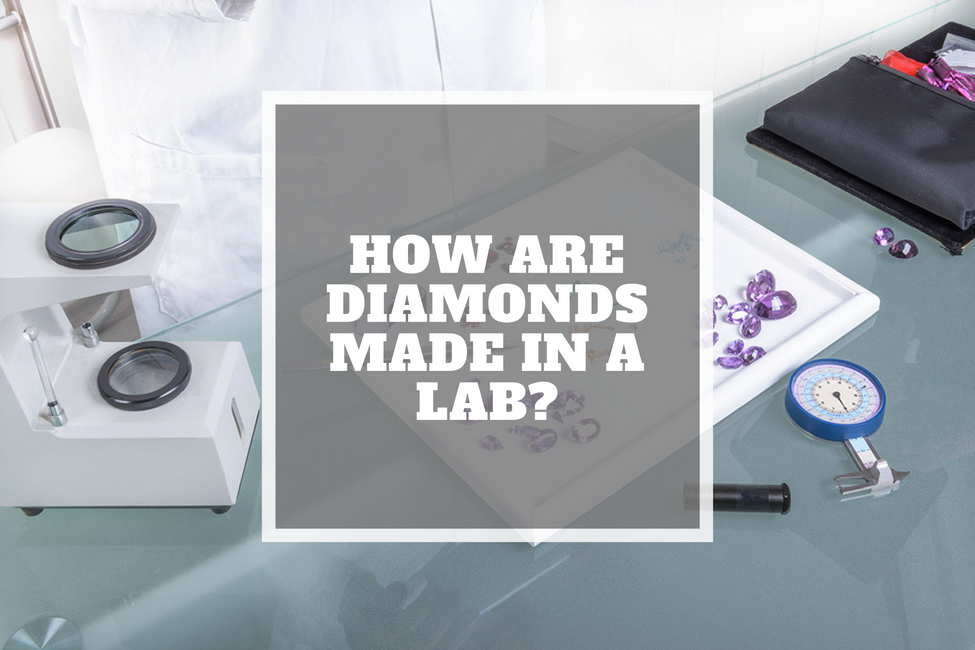 ​How Are Diamonds Made in a Lab?

How was it that I could tell at such a young age that the diamond was far superior? Was it the glitz and glamour of the stone, or was it some kind of intuition?  Diamonds are the most sought-after gems in the world and the most valuable.  Until recently, we have had to rely on mother nature to produce them for us.

However, as technology advanced, it was just a matter of time before man would find a way to produce them ourselves.  So the question is, how are diamonds made in a lab?

In this article, we’ll cover the following:

History of Lab Diamonds and How They Started

Ever since human beings discovered that diamonds were made from carbon, the race to make a quality synthetic diamond was on. The earliest successes were reported in 1879 by James Ballantyne Hannay, and in 1893 by Ferdinand Frederic Henri Moissan.

Hannay reported heating charcoal filled with iron to a temperature of over 3,500 degrees in a  furnace and allowing it to cool.  Apparently, the pressure created by the rapid cooling of the iron along with the already supplied heat provided the right conditions, and a crystalized structure emerged.

Moissan’s quest for diamond manufacturing began when the sight of a diamond studded meteorite inspired him to use his self-invented electric arc furnace to reproduce the gems he had seen. He stuck the electric arc inside between carbon rods packed into blocks of lime. After it had reached the 3,500 degrees, he immersed the molten iron in water and a crystal was born.

Although whether or not Hannay and Moissan’s experiments yielded actual synthetic diamonds or just other comparable gems is unknown, there is no doubt that their experiments paved the way for the modern method of diamond synthesis. Once the secrets of their semi-successes were revealed, scientists from all walks of life came out of the woodwork hoping to replicate their process to varying degrees of success.

However, it was in 1941 when General Electric came into the market with its vast resources that any significant progress occurred.

In February of 1955, Tracey Hall of General Electric (GE) announced that he had found a repeatable and reliable process for synthesizing diamonds. By feeding catalyst metals into a high-pressure belt press, Hall was able to accelerate carbon’s conversion into diamonds.

By 1971, GE had managed to create top quality diamonds that could be mass produced using the HPHT (High Pressure, High Temperature) process we still utilize to this day.  But they choose not to mass produce them because it was simply too expensive.

Nowadays, the costs and technology have gotten to a point where doing this is much more affordable and realistic.  Because of this, there are thousands of lab created diamonds available from various sellers.

What Are Lab Created Diamonds Made of?

Hold on to your hats, this is where we get a little scientific, but we do have some videos to illustrate the process lower on this post to help explain things visually.

Most simply, the answer would be that a lab created diamond is formed synthetically while a natural diamond is naturally occurring in the earth. When Hall created the first GE diamond, he used the HPHT method, which is the least expensive way of making diamonds and is still used today.

In the HPHT process, a diamond is formed from a combination of metals, usually including nickel, iron, and cobalt.  These chemicals are put into a capsule and placed in a high-pressure apparatus where the diamond powder melts into the metal mixture. After a few weeks, crystallization occurs and you have your diamond.

CVD is another reliable way of making diamonds. CVD stands for “Controlled Vapor Deposition”. The goal here is to make a synthetic diamond that replicates the exact physical and chemical properties of a real diamond.

A CVD diamond is grown in a vacuum container filled with gas that contains carbon, which usually means it’s filled with methane gas. The process uses a source of energy, like a microwave beam, to break the gas molecules down and the carbon atoms become attracted to the diamond seeds.

The processes of making both HPHT and CVD diamonds are constantly improving, so manufacturers can offer larger sized diamonds with better color and clarity.

It’s important to note that naturally occurring diamonds have the exact same basic chemical composition of lab diamonds, but if you’re looking to grow one of these, you’re going to have to be really patient and have a lot of machinery to make it happen.

Real diamonds were formed millions of years ago in the earth at depths of 100 miles more and were brought to the surface by volcanic eruptions. These eruptions formed pipes of an igneous rock called kimberlite. Miners break down the ore in the pipes to release the diamonds.

The pressure and temperature that natural diamonds are exposed to is higher than those used to create synthetic diamonds, and as a result, these diamonds are shaped only in octahedral (eight sided) shapes.

The lower temperatures in laboratories allow diamonds to form into either octahedral or cubic shapes.

Now we know that lab created diamonds are chemically the same as naturally occurring ones, but what exactly is a diamond simulant?

Have you ever heard of “cubic zirconia”?

Unlike naturally occurring diamonds, diamond simulants do not have the same chemical makeup of diamonds, they are simply made to look like them.

In order for a material to qualify for use as a diamond simulant, it must have diamond like properties. Namely, these materials need to be close to a diamond in durability, color, optical components (such as light refraction), and thermal conductivity.

Although strontium titanate, flint glass, and white sapphire have all been used in diamond simulants, cubic zirconia (CZ) has held the title for the one closest to a natural or synthetic diamond in physical properties….until recently that is.

In fact, CZ went almost unchallenged until 1998, but then moissanite came along and proved to be superior to CZ in two ways.

When you combine these two factors, it makes Moissanite an attractive and rapidly growing alternative.

These are naturally occurring minerals that mimic a diamond in shape and appearance. However, while many of these minerals resemble diamonds, most of them have trace impurities and color variations that keep them from possessing the stunning appearance of the white diamond.

Colorless quartz is a common natural simulant, as is white topaz, rock crystal, and most notably, zircon.

So, let’s do a little review.

If you wanted to get a naturally occurring diamond in the earth, you would have to wait for carbon containing xenoliths buried 100+ miles in the earth to pressure cook at about 2,000 degrees Fahrenheit until a spurt of lava came along and brought it quickly to the surface.

Then, you would have to spend hundreds of hours mining the walls of caverns to retrieve these xenoliths, and once you’ve done that and retrieved the diamond matter, you might not even get diamonds of a high enough quality and quantity to fetch reasonable compensation for your investment.

Lab created diamonds are different and are primarily made in two ways, HPHT and CVD.  We touched on these briefly above, but now let’s dive a bit deeper.

The HPHT process of making diamonds is closest to the way natural diamonds are made, and still widely used.

Here is the best video we could find for the HPHT process.  Ignore the sales pitch at the end of the video, but if you watch until about 2:20 you’ll see the whole process.

In order to manufacture diamonds HPHT style, you will need a press.

Like so many things that grow into something beautiful, HPHT diamond manufacture starts with a diamond seed. The seed is placed on the bottom of a press in a growth cell containing all the necessary ingredients needed to make a diamond and help it grow faster.

There, it is heated to over 1,300 degrees Celsius and subject to immense pressure which eventually turns it into a molten metal solution.

When the right consistency is achieved, the graphite in the solution dissolves. Then, after a controlled cooling process, the carbon atoms begin to attach themselves to the diamond seed gradually building a crystal structure.

It may grow into and octahedral or cubic shape, depending on the process. Once the full process has run its course, the growth cell is removed and the diamond is ready to be cut and polished,

While the HPHT method is a low maintenance way of making a diamond, there are a few things a good gemologist needs to make sure of.

The CVD diamond process is simpler and more flexible which also allows the gemologist more control over the diamond’s outcome, and is becoming the preferred method of diamond manufacturing.

Here is the best video we could find on the CVD process.

In CVD diamonds, there is also a seed, in fact, several of them, but substrate preparation comes first.

Inside the CVD machine the pressure is lower compared to in the HPHT method. Carbon gases, notably methane, are added to this environment, and heated to very high temperatures until the gases break apart and the carbon atoms are emitted.

The carbon atoms rain down on the diamond substrate, at which point it grows at a rate of a few micrometers per hour into a crystal.

The beauty of the CVD process is that it allows scientist to alter the diamond to suit any scientific needs. They can create large diamonds, up to 10 karats, add impurities to change the properties of the diamonds, create gem quality diamonds, or make diamonds stronger and tougher.

Despite its already impressive history, according to many experts the synthetic diamond industry has yet to reach its full potential.

While most people think of them as a symbol of marriage, Diamonds can be used for numerous reasons including;  machinery and cutting tools, making windows in industrial and laser applications, treating water for industrial and household use, treating eye cancer, making tools for ophthalmic and neurosurgery, and finally being used in all of the fashion and jewelry industries.

Now, maybe you understand why lab created diamonds are so important.  The scope of their use goes far beyond marriage and has so many other applications.

Now that you’ve read this article, do you better understand the process of lab created diamonds?  Would you consider buying one?