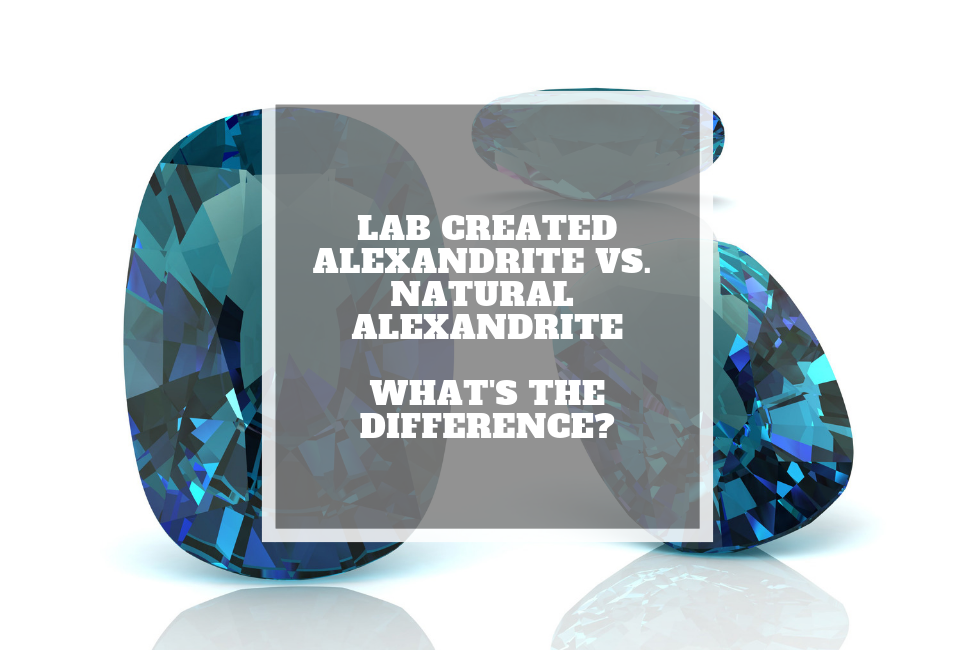 Remember the mood ring trend? Mood rings were cheap silver rings you could find in most headshops that changed color according to the wearer’s mood. It may be fair to say that the alexandrite is nature’s mood ring, only it costs a lot more than the silver ones.

Maybe the alexandrite doesn’t change color according to the wearer’s mood, but it does change color. In the day, it is the cool greenish blue of nature, at night, the fiery reddish purple of blood and passion.

The alexandrite was first discovered in the Ural Mountains in Russia and was claimed as the national stone of the country for its red and green tones, also the colors of Imperial Russia. But, its beauty was too great to be enjoyed by one country alone. Soon, alexandrite became highly sought after by people of all nations, and the supply became too small to meet demand.

This is the story of the various attempts to meet that demand and the eventual creation of the lab created alexandrite.

This article will discuss:

So how did these mystical stones form, if not by magic? Alexandrites are a form of a mineral called chrysoberyl, and their color change tricks are owed entirely to nature.

Often called “emerald by day, ruby by night,” alexandrite is a pleochroic gem that exhibits a lovely green in daylight and changes to a smoky purple-brown in candlelight.  While most pleochroic gems show hints of different colors in other light, alexandrites change color completely. The main pleochroic colors of the alexandrite are orange, green, and purple-red, but it is not the gem's pleochroism that causes this effect, but rather the way the mineral reflects light.

The color change from red to green is caused by a strong absorption of yellow light which allows more red and green to be displayed. The hue we see depends on the angle of illumination. Incandescent light will cause a reddish hue, daylight will bring out a bluish green.

Chrysoberyl forms as the result of a pegmatite process. In this process, a melting of the Earth’s crust produces magma. When this magma rises to the surface, the magma cools. During this cooling process, the magma becomes rich not only in water but also in rare elements that could not be incorporated in the crystallization of solid minerals.

The water lowers the temperature of the magma before becoming solid, which allows it to develop its own distinctive minerals. The result is an igneous rock filled with huge crystals of minerals such as beryllium, lithium, and niobian, each of which goes on to form their own minerals. Alexandrite is formed by beryllium.

The “Alexandrite Effect” (the term used commonly to describe the alexandrite color change), is the result of a small amount of the replacement of aluminum by chromium. This is what causes the absorption of yellow light. Because human vision is most sensitive to green light and least sensitive to red, we see the green color in the daylight and the red color at night.

Here is a pretty cool video showing the Alexandrite effect:

The first discovery of alexandrite was made in 1833 when a greenish crystal with a strange ability to change color was found in Russia's Ural Mountains. From then on, alexandrite became an object of interpretation by writers, obsession by gem collectors, and imitation by scientists.

The two most commonly used methods are the Czoralski process, and the “floating zone.”

In 1916, Jan Czochralski invented a crystal pulling method to synthesize rubies. It would later become the truest method of producing synthetic alexandrite.

In this process, a seed crystal is attached to a rod and is lowered into a crucible until the crystal touches the melt. After the rod is withdrawn, the crystal grows as the material solidifies. Crystals grown this way can grow to more than one meter in diameter and 50 meters in length, with a high level of purity. Alexandrite manufactured using the Czochralski process is called alexite.

The floating zone method of alexandrite manufacture was developed by an Armenian scientist named Khatchatur Saakovich Bagdasarov of the Institute of Crystallography of the Russian Academy of Moscow in 1964. The jewelry market scooped it up years later.

The floating process is very similar to the Czochralski method, only it uses a Tungsten dish pulled over a period of time under a heating element. The amount of time spent under the heating device depends on the size of the dish and the materials being crystallized.

While still an attractive alternative to real alexandrite, the alexandrite made by the floating method tends to be a bit lacking in luster when held up to the Czochralski produced stones.

Here’s a video showing how the floating process actually works:

​In the past, The flux method of making synthetic stones has also been used to produce alexandrite.  However, gemstones crystallized using this process can contain remnants of undissolved flux which can appear as inclusions in the gemstone. This makes it easy for gemologists to distinguish them from the natural stone. It is for this reason that the standard flux process is no longer used in the jewelry industry to make alexandrite.

What Is Lab Created Alexandrite Made Of?

Scientists know the conditions under which natural alexandrite is formed, and they imitate those condition as closely as possible in their laboratories, which is why the finished product is so close to the original. Because both natural and lab-grown alexandrite are made from the same material, their physical and chemical characteristics are identical.

One of the physical characteristics that identify natural alexandrite is its hardness or durability. The Moh’s Scale of Hardness rates minerals on their ability to scratch and be scratched by other minerals. The diamond is a ten, it is unscratchable by any other mineral. Talc scores a one; it can be scratched with a human fingernail.

Alexandrite rates an 8.5 on the Moh’s scale, third only to the diamond and corundum, making it very practical for everyday wear. You can basically wear the alexandrite every day without fear of chipping and cracking.

The lab created alexandrite shares the 8.5 rating. The fact that it does not come from the same origins as the natural stone make it no lesser in its ability to withstand wear and tear.

Inclusions are flaws in a stone formed during the growth process that can affect the way it reflects light. While some of these inclusions can enhance the stone’s beauty most are undesirable, and the most sought-after stones contain few inclusions if any.

Natural alexandrite is a Type II clarity stone. It may show some inclusions such as tiny crystals that appear as black spots in the gem, silky threads throughout the whole or a portion of the gem, or fissures that make it appear as if the gem were cracked.

As can be expected from anything so enviable, real alexandrite has had its share of imposters. Often synthetic materials are used to duplicate it. One common offender is the color change sapphire, which has been passed off as alexandrite for years. These would be more likely to be described as simulants rather than synthetics.

In order to determine a real alexandrite, it takes knowledge and experience.

Most gemstones that claim to be alexandrite are actually corundum laced with vanadium to produce the color changing optics. Although they are attractive and do exhibit the purple mauve color of the alexandrite, they don’t show the green color that produces the “emerald at night” effect, somewhat disappointing to those who are seeking the stone for its legendary color trick. The sapphires also tend to be clean of inclusions, are available in suspiciously large sizes, and gemological testing will reveal a slightly higher refractive index than alexandrite.

Other times, alexandrite simulants are made of glass, doped glass, plastic, and other compounds. There have been many examples of these simulants found in older rings passed off as alexandrite that proved in actuality, to be doped glass.

Although they shift color slightly, these impostors come nowhere near the true alexandrite in terms of brilliance. Most of these are easily detectable because they don’t share the physical and chemical properties that give the natural and lab created alexandrite their high level of quality and endurance.

How is Alexandrite Made in a Lab?

Although there are several methods of crystal growth today, one method which can produce a gem from anywhere between several grams to several kilograms is the crystal pulling process. It has become the dominant process today in the making of lab-created alexandrite. Here is a step by step look at how it’s done.

The Flux method is another method for crystal growth which involves dissolving the constituents of the stone into a flux. This is how it is done to produce alexandrite:

Although there have been many successful attempts at using the flux method to synthesize most gems, the results for alexandrite were not so successful. During the process, the flux left remnants in the finished chrysoberyl that appeared as inclusions, lowering the value and marring the appearance of the final stone.

In 1982, the first possible method of alexandrite growth using a temperature gradient was mentioned by a Russian scientist. This method used a convection current in a crucible to create a melt that formed crystals by spontaneous nucleation. By 1988, the alexandrites produced from the Russian flux method were almost indistinguishable from the natural stones.

The alexandrite is such a beautiful stone, it would be a crime to wear a cheap imitation. The lab created alexandrite is anything but. It’s simply a way of sharing one of nature’s charms with more people at a more affordable price.

The amount of enjoyment you get out of a lab created alexandrite is a result of the amount of time spent perfecting its creation. Nature and science wouldn’t have it any other way.

Would you buy the lab-grown alexandrite instead of the natural at a fraction of the cost? Do you give lab created alexandrite the green light or the red?

I have noticed you don’t monetize labcreateddiamondhub.com, don’t waste
your traffic, you can earn extra bucks every month with new monetization method.
This is the best adsense alternative for any type of
website (they approve all sites), for more details simply search in gooogle: murgrabia’s
tools

Most people do not realize that there are many synthetic Alexandrites and look alike on the market.

Some of these have been available for a long time already.

While determining the exact origin of a gem is a matter for professionals, here is a brief guideline. If the gem has good clarity, strong color change, reasonable size, and your grandmother was not exceptionally wealthy, it is most likely synthetic.

I think it is wonderful that alexandrite can be lab created. they are wonderful stones

I have an Alexandrite since 1964. How can I find out if it is real or synthetic.

Great article, thanks for sharing. It’s amazing how people managed to created a lab variation of the true alexandrite, one of the rarest gemstones. Easy to read and understandable.

What year were Alexandrites first lab made.