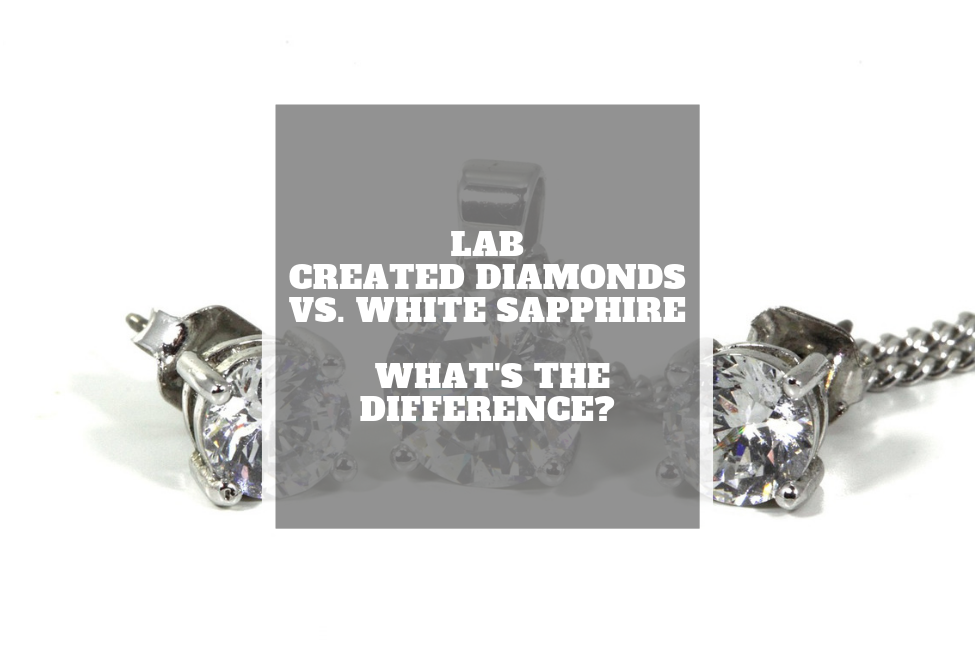 The diamond. It is the most prized stone in nature, the hardest, the shiniest, has the most sparkle and is the standard by which all other stones are compared, and also the most expensive and difficult to come by.

For years, man has searched in nature and science to find something that would combine the otherworldly beauty of the real diamond with real-world practicality and affordability, and both nature and science have presented some attractive solutions.

The white sapphire is one of nature’s solution. While it is close to a diamond in appearance, its basic chemical composition differs completely.

Both the lab created diamond and the white sapphire have presented cheaper and more accessible alternatives to the real diamond. The choice is up to you.

In this article, we will look at the following to help you decide:

What is a White Sapphire?

When most think of a sapphire, they think of the color blue. The name sapphire is derived from the Greek word sapheiros and the Latin word saphirus, both meaning “blue.”

In fact, the rulers of ancient Persia believed that the reflection from sapphires was responsible for giving the sky its full color.  Yet, sapphires come in many colors; the ruby is, in fact, the red version of the corundum mineral; the white, or colorless, is the most popularly used in wedding and engagement rings.

Sapphires are made from the corundum mineral and take millions of years to form. Corundum is a mineral that takes on its color as it forms. Sapphires are usually found in igneous rock which has a low amount of silica and a high amount of aluminum. As the crystal lattice of the sapphire develops, trace minerals can sink in, transforming the color of the stones. If no trace minerals seep in, the sapphire will be completely pure, or white. The more slowly the magma cools, the larger the sapphire will be.

If the corundum contains only a few hundredths of one percent of titanium it is considered colorless. It is for this reason that white diamonds are considered the rarest of the sapphires and is the closest in appearance to a real diamond.

What Is a Lab Created Diamond?

As soon as man realized carbon was the mineral that was responsible for the creation of the diamond, he has been trying to come up with a way to artificially simulate the rare high pressure high temperature conditions that carbon goes through on its way to becoming a diamond.

Only by doing this, scientists thought, was it possible to make something so close to the natural diamond that the difference would be undetectable to even the most scrupulous examination. He came up with not one way, but two.

The flexibility and simplicity of the CVD or Chemical Vapor Deposition method of creating a diamond make it the preferred method for mass production. In this method, a diamond is grown from a mixture of hydrocarbon gas.

The CVD method begins by forming a plasma made of methane gas and hydrogen pumped into a growth chamber with a disc containing about 15-30 diamond seeds. It is then placed into a microwave reactor. There temperatures are adjusted to anywhere between 900 to 1200 degrees to create a superheated plasma ball. The methane and hydrogen in the plasma stick to the diamond seeds, causing carbon atoms to attach themselves to the seed one by one. The process repeats for 21-28 days until the crystal structure of a natural diamond is replicated. The result is then sent off to a jeweler for cutting and polishing.

The HPHT, or High-Pressure High- Temperature  method uses a belt press to apply the high- temperature and high - pressure conditions the diamond is exposed to in the earth to form a diamond. It begins by applying pressures between 50,000 and 70.000 atm. to a cylindrical capsule, with a carbon source at the top, a diamond seed at the bottom, and a metal slug in the middle. Temperatures of 12,000 to 15,000 degrees Celsius are applied using an electric current. When the pressure and temperature levels reach the right conditions, the carbon precipitates out to form a diamond.

With each of these methods, man has been able to create a lab created diamond that is, in fact, a real diamond.  The only difference between man made diamonds and those that are naturally occurring are the processes by which they are made.  One is made in the earth, the other in a lab, but they result in the same chemical components being created.

What Is the Difference?

They say that if it doesn’t bite like a dog, it isn’t a dog, and sapphires don’t bite like diamonds because they aren’t diamonds. Lab created diamonds, on the other hand, are.

Lab created diamonds are grown using the latest advances in modern technology to duplicate the very same conditions under which natural diamonds are grown. They consist of the exact carbon atom arrangement as those formed in the earth’s crust. They have the same chemical, physical and optical properties as mined diamonds and are ethically grown for minimal environmental impact and are available in a wide range of colors.

The chemical composition of white sapphires, however, differs greatly from that of a natural diamond, and this means their physical and optical characteristics differ as well. White sapphires are formed from corundum made of aluminum oxide which gives them a cloudy appearance and less light interplay which distinguishes them from real diamonds made from carbon.

There’s a reason for the expression “tough as a diamond.” Diamonds are the toughest mineral known to man. Nothing rivals the diamond in terms of hardness and durability.

The Moh’s Scale of Hardness is the scale used by geologists and gemologists to determine the hardness of a mineral by its scratch resistance. If a mineral is able to scratch another, it will rate higher on the Moh’s scale than the mineral it scratched. Ratings on the Moh’s scale range from one to ten, with ten being the hardest and most scratch resistant, and one being the weakest and most prone to scratches. The diamond rates a ten on this scale, which adds to its desirability.

The white sapphire, on the other hand, rates a nine on the Moh’s scale making it the third hardest mineral. However, while the difference in ratings may seem trivial, they make a big difference in terms of physical properties. While sapphires can be scratched and abraded, this never happens with natural or lab created diamonds.

That means that while you can depend on an old toothbrush to get your diamond to look as good as new, you’ll probably have to depend on a jeweler to get the same results from your white sapphire.

Because stones are formed in the earth under extreme conditions, it is likely that imperfections form. The high temperature and high-pressure conditions the stones are exposed to are likely to create flaws, or inclusions, that affect the way the light passes through the stone. The degree to which these imperfections are present determines the clarity of the stone.

The clarity of a diamond is rated on the GIA clarity scale according to the presence of these flaws. The most valuable diamonds are the Flawless or FL diamonds. A diamond receives an FL rating if no visible inclusions can be seen by a jeweler using a 10x magnification. These diamonds are considered extremely rare.

The least valuable diamonds are the I-rated or Included diamonds. These are diamonds that have imperfections that are always visible to the naked eye and can affect the diamond’s clarity and brilliance. Both natural diamonds and lab created diamonds are equally likely to be flawed or included in the same way and are rated according to the same diamond clarity chart.

White sapphires, on the other hand, belong to the gemstone category and because gemstones are harder to categorize than diamonds, they are subject to a different clarity scale. The inclusions in sapphires are different and more varied than those found in diamonds, which makes them difficult to compare to diamonds and the highest rating for a sapphire is VVS or Very Very Slightly Included. For sapphires, there is no Fl or Flawless rating.

Although colored diamonds are highly prized, in white diamonds, even the hint of color will make it less valuable.  The less color in a diamond, the truer color it will reflect, and the more color it reflects, the more desirable it is.

The GIA Color Chart rates diamonds on a scale from D-Z. D-F diamonds are the colorless. S-Z rated diamonds indicate a yellow tint and usually have too much color for most customers. Lab created diamonds are just as likely to contain or lack color as natural diamonds are and are also rated on the GIA Diamond Color Chart.

White sapphires are also known as leucosphere, which means they really have no color at all, but rather are transparent or colorless. These are the rarest and purest of sapphires because they contain no other trace minerals. Like diamonds, the closer they come to containing no color, the more valuable they are.

What really sets the diamond head and shoulders above other jewels is its sparkle and fire. The fire is the colored spectrum you see when the stone is exposed to light. It is often referred to as the diamond’s dispersion or refraction. The sparkle is the brilliance or amount of clear light a diamond reflects and is known as the diamond’s reflection.

White sapphires have a much lower refractive index and less fire than real diamonds and don’t have the same optical qualities. That means that the white sapphire will require frequent cleanings to keep it looking its best. When a stone has less brilliance, it is more likely to show up dirt. As buildup from soaps and lotion accumulate, the facets of the white sapphire won’t continue to reflect light as well as lab created diamonds.

The superior sparkle of real diamonds means that it is able to reflect light even when there are dirt and water spots. White sapphire is transparent and requires a clean background. In order to keep your white sapphire looking as good as the day you got it you will have to clean it frequently, which may require a good toothbrush or few extra trips to the jewelry store.

​Lab Created Diamond or White Sapphires: Which is Better?

Now, let’s break it down: which is better the lab created diamond or the white sapphire?

However, although the white sapphire is a hard mineral, it is more likely to show signs of wear than a lab created diamond. Sapphires are known to get a frosty appearance as their facets wear, lab created diamonds remain bright and clear.

In terms of color, the sapphire is a gem most prized for its color. If you want to get a colorless stone, the lab created diamond is a much better choice.

Lastly, when it comes to fire and clarity, the white sapphire as much of a detriment than it is a benefit.

In a comparison between the lab created diamond and the white sapphire, the winner is clear.

The white sapphire may be a beautiful stone in its own right, but in comparison to the diamond, whether lab created or not, is the hands down choice.

So, what will it be for you after reading this article? Is the white sapphire just a stone that happens to look like a diamond, but pales in comparison or does it have some value of its own? Would you still consider the white sapphire an option for your engagement ring?