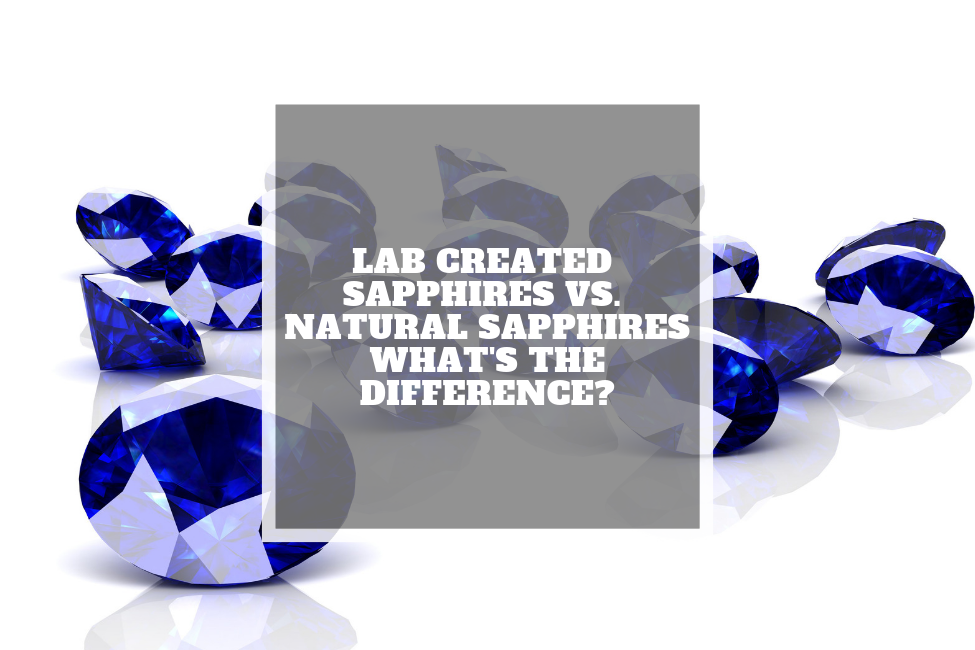 It’s been said that imitation is the truest form of flattery. Celebrities and pop stars know they’ve made it when someone starts copying their style. It means they’ve arrived.

One of the problems with imitation is that it never seems to quite hold up when compared to the real thing. Attempts to recreate the sapphire in a lab often ended in coming up short; simulants just didn’t compare, and synthetics were easy to spot as synthetic.

It wasn’t until 1902 when Auguste Verneuil discovered the flame fusion method and the first truly successful lab sapphire was created.  This article will discuss:

What is a ​Sapphire?

For most people, blue is synonymous with sapphires. In fact, the name sapphire comes from the Latin word saphirus meaning blue. The ancient Greeks believed it was the reflection of the sapphire gave the sky and lakes their colors. However, sapphires are actually available in a variety of colors, each valued for their individual characteristics.

A sapphire is a precious gemstone made of the mineral corundum, or aluminum oxide (Al2O3).

It’s formed by volcanic processes in rock deep in the earth under high temperature, high-pressure conditions. When the hot rock begins to coo​​l, crystallization occurs. This is when the coloration of the sapphire occurs.

As the sapphire takes on its crystal structure, impurities leak in. These impurities are what give sapphires their illustrious colors. When titanium and iron seep into the Al2O3 crystal lattice, a blue hue is created. If chromium seeps in, the rock will be red and will be considered a ruby.

If the crystallization of the stone takes place in igneous rock, the rock will remain pure and transparent in color, resulting in the white sapphire, commonly used in engagement and wedding rings. These are the rarest type of sapphire and, takes the longest to grow. It often takes millions of years for conundrum to develop into a pure white sapphire.

With such an intriguing history and powerful beauty, it is little wonder that sapphires came into high demand so quickly.  Yet with natural sapphires, so few and far between it soon became clear a backup source was necessary.

What is a Lab Created ​Sapphire?

In the earlier part of the 18th century, attempts began at reproducing a corundum based gem.  In 1837, it was discovered that microscopic crystals of aluminum oxide, the raw material for corundum, could be produced synthetically, and in 1877, chemist Edmond Fremy found a way to form gemstone quality stones using these crystals in a molten aluminum bath.

Soon Fremy joined forces with Auguste Verneuil to create the flame fusion, or Verneuil method, of creating stones from corundum. which is still used virtually unchanged to this day.

Verneuil’s first inspiration came when looking closely at a synthetic ruby collection, he found that authentic looking gems could be made by flame fusion, a process of recrystallizing aluminum powder into a large gemstone. This along with the newly developed oxyhydrogen torch and the growing demand for rubies led him to develop the Verneuil furnace.

In this contraption, purified chromium oxide and alumina are melted by a flame of at least 2000 degrees Celsius and recrystallized on a support below the flame to create a crystal.

While the Verneuil method is still used widely to this day as a leading producer of synthetic corundum and spinel gemstones, other methods have been introduced and improvements have been made.

The Czochralski process was developed in 1917 and has been shown to be beneficial to the semiconductor industry, in which the stones required were of a higher quality than the Verneuil Process was capable of producing. Bell Labs introduced the hydrothermal process in 1957 and Carol Chatham introduced the flux method in 1958.

​Here’s a video of the flux method:

While these processes may differ in terms of methodology, one thing holds true for all of them They all contain a starting material of 99.995% alumina. Alumina is the same material from which natural sapphires are created and are the main reason lab-created sapphires are so difficult to distinguish from the real thing.

What is the Difference?

The differences between a sapphire and a lab created sapphire can’t be spotted with the naked eye; it takes very powerful magnification to see the dissimilarities. Because the lab created sapphire has an identical chemical composition to the natural sapphire (Al2O3), they have identical optical and physical properties, which makes them indiscernible from one another to the unaided eye.

Under the scrutiny of highly advanced tools, these differences can be spotted. Lab created stones contain fewer inclusions on the whole than natural stones and the inclusions that are there often different from the ones found in earth grown sapphires.

In the end, this boils down to are higher quality stones. Because lab-created sapphires rely on a controlled process of applying minerals, they can be made with less and less noticeable inclusions, for a longer wearing stone with better light refraction and dispersal.

When it comes down to the bottom line, lab-grown sapphires are the real deal in more ways than one. Depending on size, loose natural sapphires average upwards of $30 for a quality stone, the finest stones can fetch near $50. Lab created sapphires cost an average of $8-$10 dollars less and considering the fact that what you get is of almost identical to the real diamond, that’s quite a bargain.

In 1812, mineralogist Friedrich Moh’s established the Moh’s scale of hardness which ranked minerals according to their resistance to scratching on a scale of 1-10. The diamond scored a ten, earning its title as the world’s hardest mineral. Corundum ranked a 9, identifying itself as the second hardest mineral known to man.

Likewise, the lab- created diamond is made of corundum and likewise, it scores a 9 on the Moh’s scale.  Because no synthetic materials are used in the creation of sapphires, they’re impossible to distinguish from the natural sapphire in terms of hardness and visual characteristics.

When it comes to durability, the lab created sapphire has a slight edge. Because lab created contain fewer inclusions, the sapphire is less likely to break or chip than the natural sapphire and less chips means less heartbreak.

You may not spot the difference with the naked eye, but you’ll be able to tell from the longevity you get out from wearing it. With lab-created sapphires, what you get is a high-quality stone, you can rely on to stay as tough as it is beautiful.

The clarity of a stone refers to its number of flaws or inclusions. Generally, the less flawed the stone, the more desirable it becomes. Most stones are rated by the same clarity standards used to rate diamonds known as the GIA clarity scale

The GIA clarity scale rates diamond according to the number of flaws it has. An FL rating means the diamond is flawless and free of inclusions, an “I “rating indicates the stone is highly included. The fewer flaws the diamond has, the more valuable it is perceived to be

In the case of sapphires, clarity is viewed in a very different way than it is with diamonds. Because sapphires are formed in an environment with a large number of trace minerals and under very extreme conditions, they are more likely to contain flaws than not.

In addition, not all of these flaws make the sapphire less valuable, in fact, many make the stone more valuable. So, an “I” rating would not hold the same meaning for sapphires as it would for diamonds.

White diamonds are prized for their lack of color. The most valuable diamonds are the most transparent, hints of color will lower the diamond’s worth considerably.

Sapphires are prized mainly for their color, but because they come in such a wide variety of colors, it is difficult to set a standard for judging all of them. Therefore, when it comes to judging the color of sapphires, it depends on the individual stone.

Natural sapphires get their colors from trace elements of other chemicals leaking in during the crystallization process. Because lab-grown diamonds differ in origin from their natural counterparts, the exact color composition of the natural sapphire is hard to duplicate. Lab created diamond can be made to provide choices in color that Mother Nature can’t give in the same way.

Difference in Sparkle and Fire

When we look for a stone that reflects light or disperses light, we look for light, that is we look for the stones with a light color, light tone, and light saturation of color.

The sapphire is, on the hand, by nature, a stone with color, and generally, the more saturated the color, the lower it’s dispersal and refraction of light. A medium tone, blue sapphire has a low dispersal.

The RI, or refractive index, of natural sapphire is 0.018, the RI of a diamond is 2.4175. The fire of a lab created sapphire is between 1.762 and 1.778, the diamond has a dispersal index of 2.4. What we sacrifice in sparkle, we make up for in intensity of color. There is a tradeoff between the two.

Lab Created ​Sapphire or the Natural ​Sapphire: Which is Better?

Making lab created sapphire requires quality control. When a gemologist creates a sapphire in a lab, the most important thing is the way it looks, lasts and shines, the aim is to make sure of one thing: that your sapphire is as beautiful as it can possibly. Investing in a lab created diamond means investing in the highest quality sapphire there is.

So, what do you think? Would you invest in a sapphire at a fraction of the price and a total of the quality? Will a lab created sapphire be your next investment?

I found all this information highly informative. Thank you for posting it.

Who makes sapphires? Do you the name of companies that make it ?