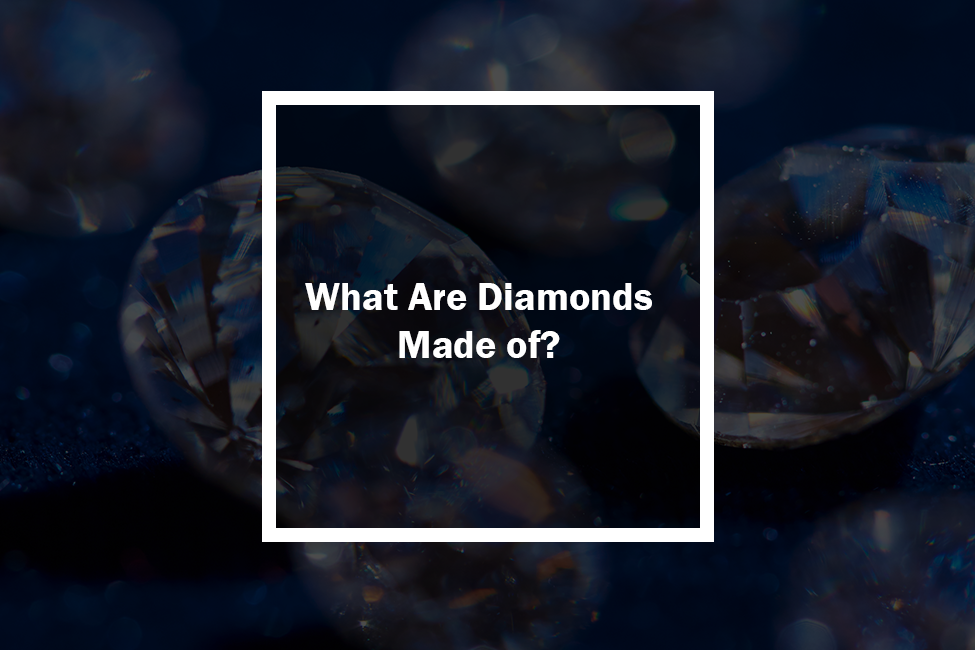 What Are Diamonds Made of?

When something is the best, it becomes the measure of all other things. A high performing car may be the standard by which all other luxury cars are judged. A fine wine may set the bar for all other wines. In the world of jewelry, the diamond sets the standard. A diamond of the highest echelon is the most durable, clearest, shiniest, and most valuable gem, and the measure by which all other jewels are judged. No other gem can quite attain its quality.

Like everything else, many of the properties of the diamond that make it so inimitable are due to what it’s made of and how it is grown. The process of growing a diamond happens in extreme conditions rarely found in nature. In order to duplicate the diamond, the materials and conditions have to be duplicated as well. Only then can a convincing synthetic version be created. This article will discuss:

The rare chemical composition of a diamond is what distinguishes it from any other mineral. The diamond is the only gem made purely of a single element. The chemical formula for a diamond is C. It is made typically of 99.5% carbon, with the other 0.05 % containing trace minerals.

Diamond is also the hardest known substance. It derives its name from the Greek word Adamas, meaning “untameable” or “unconquerable.”  It is little wonder that the word is now synonymous with the diamond.

On the Moh’s scale of hardness, the diamond rates a 10, the highest number on the scale, putting it ahead of its competitors by a landslide. Corundum, the second hardest gem, has only ¼ the diamond’s durability.

The way the diamond forms plays a major role in determining its identity. Diamonds grow under rare high pressure and high-temperature conditions that only exist within a very narrow depth range in the earth, which is why we often use the expression, “as rare as a diamond.”

Their crystals bond isometrically, which makes their structures exceedingly strong. Graphite is also made of pure carbon, but it is so soft that it crumbles when it comes into contact with mere paper. Diamonds are so hard that they can only be scratched by another diamond.

The luster of the diamond is adamantine as well. Diamonds exhibit a strong fire and brilliance that only synthetic materials can equal or exceed. It has the densest atomic configuration of any mineral and is transparent over the greatest number of wavelengths, making it one of the toughest and most beautiful treasures of the earth. Had the carbon not been in the right place at the right time, under the right conditions, the diamond may never have formed. Luckily for us, the fates smiled.

The perfect diamond has no color. However, as they say, nothing is perfect. In reality, chemical impurities and defects found in the crystal lattice can cause the diamond to change color. As the diamond forms in the earth, other chemicals, and trace elements leak in, causing the diamond to take on the colors of the other minerals.

When nitrogen is present, a yellow or brown hue is detected. The presence of this amber color causes the diamond to depreciate in value. The clearest diamonds are the most desirable.

The GIA color rating runs from D-Z, with D-F ratings indicating a colorless diamond. While there may be small differences in the color of D, E, and F diamonds, they are usually only visible in a side to side comparison under high powered equipment. G-J diamonds are near colorless. Because I-J diamonds are more common than higher grade diamonds, they can retail for half the price of a D diamond, making them a smart choice for consumers.

Starting with the K grading, color tends to become visible to the naked eye. The yellowish tint of K to M diamonds may appeal to some, and at half the cost of a D diamond, can be an exceptional value.

Diamonds in the N-Z categories have a strong yellow tint and are generally not carried by most jewelers on the market due to lack of demand. However, they may be available on custom order.

If you know the 4Cs of determining the quality of a diamond, you’d know that after color comes clarity.

The GIA clarity scale contains 11 grades from Flawless (Fl) to Included (I). A stone in which no inclusions are visible using a 10X magnification is considered flawless. These fetch the highest prices on the market and are very rare indeed.

Diamonds are considered “included” when flaws are obvious under 10X magnification and impact the stone’s brilliance and transparency. Most stones fall under the Very Slightly Included (VSI) or Slightly Included (SI) range. Diamonds considered included are usually not available on the market because of low consumer interest.

What Lab Created Diamonds are Made of and How they Differ

From what we have learned thus far, we can conclude a few things: the conditions for growing a natural diamond are rare, and the chance that they’ll come out colorless and flawless is even rarer. Add to that the growing demand for diamonds, and it seems like the creation of a synthetic diamond would kill two birds with one stone.

As soon as it was discovered that carbon was the starting material for the diamond, attempts have been made to convert cheap forms of carbon into the prized crystal. The basic idea is to recreate the conditions that exist in the earth when a diamond is formed in a laboratory. and expose the carbon to these conditions. If it could be done perfectly, the perfect lab created diamond could be formed.

The first successful attempt at creating a diamond in a lab was achieved using the HPHT or High-Pressure High-Temperature method. In this method, a press is used to supply the pressure and temperature needed for diamond formation. Diamond seeds are placed at the bottom of the press and the internal part of the press is heated to above 1,400 degrees. The solvent metal melts and dissolves the pure carbon source. The molten mixture is then precipitated over the seeds, forming a large synthetic diamond.

The CVD or chemical vapor deposition method was introduced later. In this process, the diamond is grown by using a hydrocarbon gas. The main advantage of CVD over HPHT is that it allows for finer control over the chemical properties, which means a higher quality of diamonds can be produced.

The CVD process begins with a substrate preparation which involves feeding gases into a chamber and fueling them. The gases always include a carbon source, typically methane, and hydrogen. The hydrogen is crucial because it gets rid of the non-diamond carbon. The gases are ionized using microwave power or some other energy source and the crystal begins to grow. As it cools, the diamond takes shape.

So how do these lab created diamonds measure up to the real thing? Survey says, “Flawlessly.” In fact, these jewels are so convincing, they’re threatening to put natural diamond sellers out of business.

The natural diamond and the lab created diamonds are identical in chemical composition which means they have the same chemical and physical properties. Both receive a 10 on the Moh’s scale of hardness and exhibit the same brilliance and sparkle. They are indistinguishable from one another using a jeweler’s loupe and impossible to detect using the naked eye.

There are, however, some things that the eye can’t detect, separating the lab created diamond from the natural one.

First, they are formed differently. Unlike the earth grown diamonds, the lab-grown process uses diamond seeds to build the layers of carbon bonds that form a diamond. The natural process relies on the heat and pressure from the earth to create the isometric formation responsible for the immense structural strength.

Lab-grown diamonds are also Type IIa. That means they have almost no impurities from nitrogen and many of them are, “colorless,” or D-grade. Because they are so much more common than natural D-grade diamond, (fewer than 2% of natural diamonds are Type IIa) they can be sold at a fraction of the price.

What Diamond Simulants are Made of and How They Differ

Simulants can also be sold at a fraction of the price of diamonds, but there are a few reasons you might want to choose Lab Created Diamonds over simulants.

Before the advent of superior diamond coatings and cultured diamonds, there was cubic zirconia. Cubic zirconia rates a respectable 8.5 on the Moh’s scale of hardness, making it a fair choice in terms of durability and hardness, but there is one thing missing from cubic zirconia, and that’s carbon.

A laboratory diamond is made of carbon atoms arranged in a crystal structure, which makes it a real diamond. Cubic zirconia can become scratched and cloudy with time because of its tendency to absorb oil, which means it requires more upkeep than diamonds.

Cubic zirconia also has a higher level of dispersion and a lower refractive index than the diamond, so while it will flash and sparkle like a large diamond, it will lack the captivating depth of a diamond which makes it appear authentic. Another thing about CZ is that it’s always flawless, and while flawlessness may be a desirable characteristic in natural diamonds, in cubic zirconia, it only serves to separate the simulant further from the natural diamond.

Moissanite is a beautiful stone in and of itself, but as a diamond substitute, it tends to fall short. Classic moissanite is never colorless and has often been compared to a K-color diamond, which would normally lower the value of the diamond by half.  It gets a 9.25 on the Moh’s scale and disperses light well, however, it is composed of crystal carbide and is easy to distinguish from the diamond in terms of chemical composition and physical properties.

Simulants can be useful if you have your heart set on a certain setting and want to be able to wear your ring without having to wait for an upgrade, or if you want to create your own stylish ring without paying the higher price for the diamond. Ultimately, nothing is going to compare to the lab created diamond when it comes to color, clarity, sparkle, and durability.

Lab created diamonds simply are diamonds created more efficiently in a more controlled atmosphere that helps the jeweler to avoid the pitfalls of diamond growth in the earth, so the consumer gets a high-grade diamond with a greater availability that allows the jeweler to lower the cost sufficiently.

What do you think? Would you buy a high-quality lab-created diamond at half the cost, or would you hold out for the natural diamond?