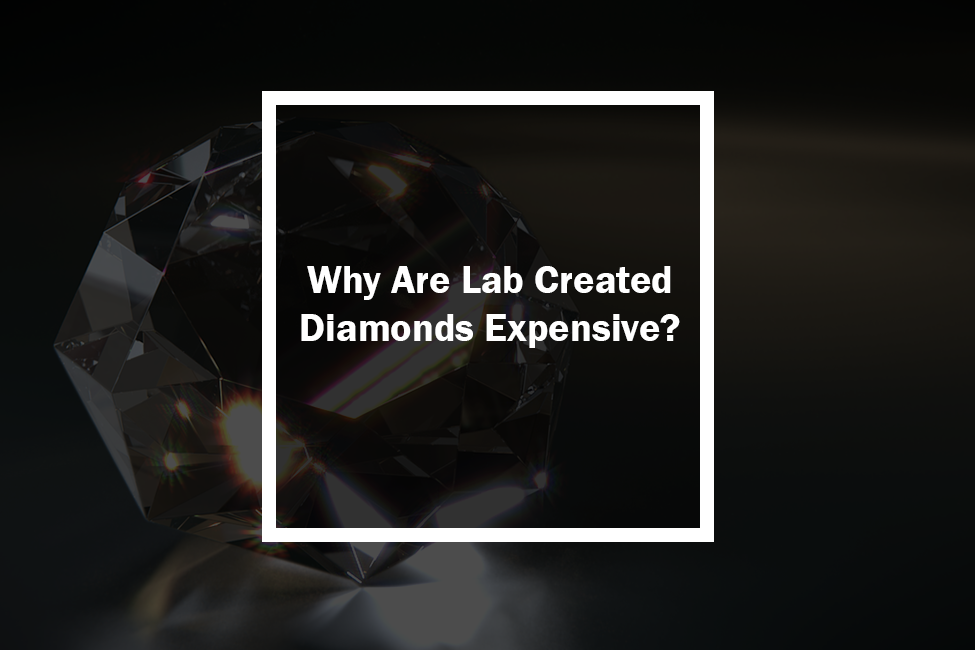 Why Are Lab Created Diamonds Expensive?

If you’re in the market to buy a lab-created diamond because you’ve heard about how affordable they are, you might want to prepare for sticker shock. Customers looking for a bargain are more likely to ask themselves why lab-created diamonds are so expensive rather than why they’re so affordable.

The truth is that lab-created diamonds do cost a lot. They require time, workmanship, and expensive machinery to create, and that does show up in the final cost. After all, you get what you pay for.

All this brings us back to the initial question, “Why are Lab -Created Diamonds so Expensive?” We’ll give you a breakdown of that and also explain to you why they’re worth the cost. In this article, we will discuss:

Why Lab-Created Diamonds are Cheaper than Natural Diamonds

How Lab-Created Diamonds Are Manufactured

Long, long ago in the late 19th century, a man named Henry Moissan claimed to have made a diamond by heating charcoal to 3,500 degrees inside a carbon crucible. Whether it worked or not was debatable. Attempts were made to recreate the process, none were scientifically proven.

It soon became clear that the problem lay in the crystallization process. Diamonds in nature are a crystallized form of carbon, and forming an artificial crystal was key to the creation process.  Soon, it was discovered that the only way to get the diamonds to crystallize was by reproducing the high temperature, high-pressure conditions that occurred when a natural diamond formed in the earth.

The first successful attempts at making a synthetic diamond were made by mimicking the conditions of nature.  HPHT (High Pressure/ High Temperature) manufacturing uses one of three processes to do so. Those are the belt press, the cubic press, and the split-sphere (BARS) press. Each process begins with a diamond seed surrounded in carbon and placed under high pressure and high-temperature conditions. The way that pressure is delivered varies with the type of press.

The original GE belt press used anvils to supply the pressure necessary for diamond formation, and in an environment of 2,000 degrees Celsius, the carbon was no match. It melted and began to form a diamond seed, and although that seed was somewhat underwhelming, it was a start.

Within time, technology advanced. When belt presses were upgraded and the more modern split-sphere and cubic presses were introduced, more perfect diamonds could be produced. As of today, the largest diamond produced by HPHT method weighs in at 10.02 carats and is impressively graded as VS1 clarity and E color.

The CVD or Chemical Vapor Deposition process is the more recently developed method for diamond growth and is the one more widely used to create gemstone quality diamonds today.

In this process, a thin slice of diamond seed is put in a sealed chamber heated to 800 degrees Celsius. Then a carbon-rich gas, typically methane, along with other gases are allowed to infiltrate the chamber.  Microwaves and lasers are used to break apart these gases causing the carbon to stick to the diamond seed, slowly building into a crystal.

Between the two processes, CVD is the preferred method today, as it has several advantages over the HPHT method. Namely, high pressure is not necessary; in addition, the temperature doesn’t need to be as high, which allows for greater efficiency.  This also provides for better control inside the growth chamber, which gives greater manipulation over the properties of the finished diamond, providing for a diamond of better quality.

As a result, CVD diamonds grown today are almost indistinguishable from natural diamonds. As technology continues to advance, we grow closer to the possibility of perfect CVD grown lab-created diamonds.

As you can see from the above, lab-created diamonds are produced, and as with anything that is produced, there are costs attached to the means and methods of production. Growing a diamond requires physical lab space with a high electrical current to run high powered machines. Diamond seeds have to be prepared and computers are needed to monitor growth at every millisecond. Fans and pumps are essential for temperature regulation, and that’s only before the experiments to perfect the growth process begin.

After that comes the cost of ingredients, specifically the highly purified carbon, the energy costs, and computer monitoring. In the HPHT method, the high levels of pressure cause the machinery to wear out quickly and pressure applying anvils have to be replaced frequently, increasing costs further.

Another major issue with lab diamond growth is that diamonds are temperamental. As diamonds increase in size, they take an exponentially longer time to grow. While it may take only a matter of days to grow a 0.5-carat diamond, it takes a significantly longer time to grow a 1.5-carat diamond, and not just three times as long. The longer it takes for a diamond to form the more difficult it is to keep the growth environment stable, which further extends the growth period.

Plus, diamonds have a nasty habit of trying to spin off to form new crystals rather than growing one main crystal. That’s why large diamonds are so rarely found in nature as well as in the lab. They’re also hard to cut and polish due to their extreme hardness.

So maybe you’re thinking that you want to scrap all that. If diamonds are going to be so temperamental, why pay for all those bells and whistles? A cubic zirconia stone gets along much better with others.

Cubic zirconia grows in a steady fashion so it can form large stones that can be easily cut into smaller ones. It’s is also a relatively softer stone than the diamond, which means it’s less of a challenge to cut and polish. As a result, the cost is much cheaper.  A mediocre grade, two-carat diamond will sell at about $5,000. A 2-carat cubic zirconia will start at about $30).

Why Lab-Created Diamonds are Worth More than Cubic Zirconia

Cubic zirconia is named for its crystal-like symmetry and chemical composition of zircon oxide.  Like the lab created diamond, it is made in a lab. However, in the case of cubic zirconia, the laboratory process focuses on imitating the sparkle of a real diamond, and it doesn’t even do that very convincingly. In a lab-created diamond, the emphasis is on recreating the whole diamond, genuine sparkle included.

The problem with cubic zirconia is that while it captures light well, its refractive index is not as high as a diamond’s, nor is its dispersal index as low. That means it reflects light in a different manner than lab created diamonds.  CZ doesn’t shine as brightly but it has more brilliance, or scattered light than the lab created diamond. As a result, cubic zirconia stones may flash more than a real diamond, but they will fail to achieve the same captivating depth.

Cubic zirconia is flawless and colorless as well.  A real diamond is never completely without flaws. That means the cubic zirconia can be easily spotted as a fake, and not just under a jeweler’s loupe. The upshot? Keep the CZ to the costume jewelry category. Diamonds are forever, CZ is for fun.

So why are lab-created diamonds so expensive? Because they’re a class act. They’re made with top quality ingredients and equipment in the most cutting-edge facilities under expert scrutiny to duplicate the natural diamond in every way.

Are they worth it? Absolutely. You will never find a more beautiful diamond at such a low price, guaranteed.

After reading this, don’t you think that lab-created diamonds are worth the cost?